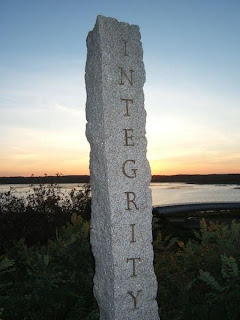 The price good men pay for indifference to public affairs is to be ruled by evil men.


It's been suggested that if all animal species were allowed to vote as to whether humans will be allowed to continue on Earth, we would be voted to extermination.  The other sentient beings we share the planet with may not be supportive of our ways.

There are the bankers who rob the public trust and the industries that are killing our planet for profits.   There are the lawyers and the HMOs that corrupt our justice and health systems.  Then, of course, there is the political scene.  Can an honest person get elected?  It's a rhetorical question - better to go to the source and ask the lobbyists for industry, PACs and other special interest groups.

There are the marketing messages that flood our lives daily to slick up the truth about products or services.  It was reported recently in the Huffington Post that a man actually sued Anheuser-Busch because the poor guy found that he was still not surrounded by beautiful women in a tropical setting despite having consumed copious quantities of Bud Light.  The very fact that we think it is ridiculous to take such marketing seriously demonstrates the mental filters we've developed to cope with the situation. Yes, we are certainly bombarded with less than full integrity by marketing campaigns to the point that we've become so numb that it only reaches us through the subconscious.  And so, the messages are carefully engineered to reach us in that way.

It's time to clean up our act.

I wrote about some of my personal stories around integrity and their personal impact last month - see "Stories: Good (and Not-So-Good) Vibrations".  I'm interested now in examining the role of integrity in our lives without demonizing or blaming anyone.  Simply, is it possible for a large, diverse society to live in full integrity?  How might such a society be constructed?  Despite the bleak message from the examples chosen above, there is a renewed interest in integrity by individuals and within businesses and other organizations.

One problem that comes up quickly in a discussion is defining a subjective quality such as integrity.  Is my integrity your integrity?   Right is different things to different people.  Many progressive thinkers seem to agree that right and wrong are man-made concepts constructed from religious or tribal beliefs and therefore vary between and within cultures.  In a Taoist sense, right and wrong are dualistic manifestations of the mind.  Hmmmm,  integrity seems difficult to envision on a large scale if we have difficulty simply defining it universally.  But, integrity is like art -- one knows it when one sees it.

Regardless of our definition, integrity seems to get breached in favor of one of two things:

That simplifies it.  Perhaps we can build integrity by managing our desires and aversions.  That sounds rather "Buddhist" --  someone must have thought of this before.

We can take it further.  Desires and aversions are run by ego.  The ego has lots of desires around wanting to be distinctive and avoiding anything unpleasant.

Enlightenment is sometimes described as an ego-less state. Our egos filter the information we receive and manipulates the data to serve its own existence before presenting it to our conscious mind.  Illusion is the product of ego and few people have been able to pierce its veil. Out of the illusion comes greed and excess, fears and insecurity -- desires that the mind can not distinguish from needs and fears that the mind equates with danger.  Integrity can easily be overshadowed by what the mind perceives to be something more important.

So, integrity will be present in the enlightened ego-less state and it will be breached more frequently and harshly within the domains of fear and greed. It seems, therefore, difficult to imagine a large society living in full integrity as long as fear and greed permeate the culture. Thus, to answer my own question, it doesn't seem likely that Earth's human race will be living in full integrity anytime soon.

The long-term strategy would then seem to be to work towards building an enlightened society. While we're in that process, simply notice, be aware, and try to protect oneself as best one can - paying heed to the warning indicators.   Don't expect integrity among those who strive for material wealth, those who embrace the ego or those who are fearful. Find it more abundantly in the stillness of the unmanifested.  Look beyond the illusions and integrity will be revealed.
Posted by Lee Jensen