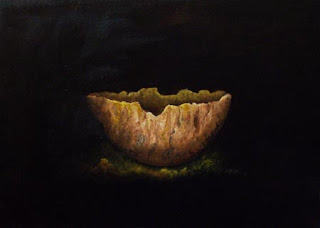 Form is emptiness, emptiness is form

-- Heart Sutra
Emptiness is one of the most important and poorly understood concepts of Eastern philosophy. To Westerners, conditioned to prefer things full and rich, empty usually has a negative connotation and often conveys apathetic, worthless, nihilistic or lacking. But, in several Eastern traditions, emptiness is highly valued. It can be used in various ways to state that everything is empty of absolute identity, permanence, or self. This is because everything is inter-related and mutually dependant - never fully self-sufficient or independent. All things are in a state of constant flux where energy and information are relentlessly flowing throughout the natural world giving rise to and themselves undergoing major transformations with the passage of time (ref: Wikipedia “Śūnyatā”). The subtleties that underlie this simple explanation of a complex concept have given rise to various schools and lineages of Eastern philosophy and academic debates.

Thus, "living in emptiness" may describe living with the realization of impermanence or lack of absolute identity. My layperson’s practical understanding of emptiness is concerned more with a state of stillness of mind. During meditation, we notice how active and proliferative the mind can be. Thoughts constantly arise and subside like overlapping wiffs of smoke. As we notice the emptiness of our thoughts, the mind settles and the chatter subsides. There is more available energy, it seems, to see things in their true nature. The mind empties its thoughts and delusions and space is created for clarity, insight and awareness to arise. The reactive mind becomes a mind interactive with the true nature of things around it.


Much of the insight gained during meditation is also empty -- afterall, we're just watching our mind turn as we sit on a cushion. We can investigate and contemplate, but it's only a “practice”. The higher intention is to live in emptiness. This is a quality that most highly sufficient people seem to have to varying extents. The best scientists, musicians, and artists hold a noticable noble stillness that manifests in the skillfullness of their work.


A bucket that is intended to carry water will not perform its function if it is filled with sand or gold.

We join spokes together in a wheel,
but it is the center hole that makes the wagon move.
We shape clay into a pot,
but it is the emptiness inside that holds whatever we want.
We hammer wood for a house,
but it is the inner space that makes it livable.
We work with being,
but non-being is what we use.

“The Noble Path & The Red Road”

I’m mindful today of participating yesterday in an Indian Sweat Lodge ceremony with Fred Wahpepah, a 79-year-old Native American elder, some of his friends, and members of the Spirit Rock community.I won’t pretend to understand the custom, so I won’t try to explain the origin or hundreds of years of history -- as I would undoubtedly mislead you. I’ll just reflect on the events of the day, keeping in mind that it is a sacred ritual and I'm sure that I don't have everything correct.

The day began with the usual sitting and walking meditations. After a light lunch, we reconvened around a blazing campfire. There was some drumming, some prayers were said, chants were sung, and some pipes smoked (tree bark, according to Fred - nothing from Mendocino County). Behind the fire sat a “lodge” framed with willow tree branches and covered with heavy blankets – it was probably not more than 4 feet tall at the center. The floor was earth, covered with blankets. Fred explained that the ceremony was a ritualistic re-entering of the womb to commune with the Spirits Guides.

We were bathed in smoke from burning sage as we crawled into the lodge on our hands and knees – 26 souls. It was cramped and claustrophobic by the time we were all squished in. The blanket that served as our door was closed and we sat in complete darkness. There was more drumming, more chanting and more prayers. The door opened and a red-hot stone from the fire carried on a pitchfork was passed through and placed into a pit dug at the center of the lodge. It was sprinkled with pine shavings that flared when they touched the hot stone, releasing a pungent smell. Then several other stones were passed in and sprinkled before the door was closed again. The stones glowed red in the complete darkness and radiated heat in all directions. We all began to sweat – I can say “we” because, though it was not visible, I could feel the sweat from the people on either side of me mix with my own. Water was poured on the hot rocks and the sweat ran off our bodies like rain drops. Then we began a circle prayer – each person in the lodge was to say their own prayer followed by “Ho!”, to which everyone else chanted “HO!!!”. My prayer was for peace and enlightenment between diverse nations, diverse cultures and diverse people – it seemed appropriate and I felt a deep sense of integrity as I spoke the words. Others prayed about difficult situations, sick loved ones, lost friends or peace.

The door opened again halfway through the circle prayer bringing a few rays of sunlight. More importantly, cool fresh air entered -- it felt incredible. A jug of water was passed around from which we all drank – it tasted incredible. Then, the door was closed and we finished the prayer circle. We completed the ceremony with some singing, chanting and more prayer. I felt complete and silently sighed in relief as the door opened again for the final time. I survived -- I wasn’t absolutely certain that I would.

After rinsing off with a garden hose, we setup a feast in the meadow. Fred prepared the first plate – a small sampling of everything that had been brought to eat. A prayer was said and Fred asked that the plate be placed on the ground in the meadow as an invitation for the Spirit Guides to join us.

Last night, as I drifted off to sleep, I was startled to hear the Spirit Guides speaking in their native tongue. I wish I knew what they said.

Posted by Lee Jensen No comments: