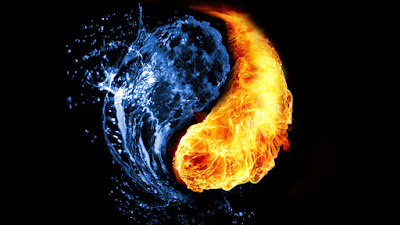 "Reality is merely an illusion, albeit a very persistent one.  Hence, it is clear that the space of physics is not, in the last analysis, anything given in nature or independent of human thought.  It is a function of our conceptual scheme."


At some point, common sense seems unattainable; the world pulsates, rhythmically, in and out of existence.  It's an uncanny bewilderment that shifts one's boundaries of sanity.  Cracks in the conceptual framework of old paradigms manifest as cognitive dissonance, disrupting an archaic personal view of the world.  Consensual reality becomes unconsensual.  Self-importance dissipates as progressively less is available to attach to it; it doesn't go away, there's just less to make special.  It's an uncontrolled slide from there, past a point-of-no-return where fewer choices are offered.  One naturally renunciates more and more of the illusion until, finally ... it shatters.

The illusion arises predominantly from thought consciousness as it intertwines with sensory input.  It's an amazing display of the mind. But, it's a virtual reality sequestered from the flow of the present state.  We lose fundamental cognition of our environment in accepting for reality this personal, deluded view.  Breaking it is deceptively difficult and it is even more difficult to hold the unadulterated perspective; delusion is extremely pliant and self-organizational.  It is very difficult for the mind to detect the illusion it personifies.

"When you see that all forms are illusive and unreal,
then you will begin to perceive your true Buddha (awakened) nature."
~Siddhartha Gautama
Diamond Sutra

Human consciousness becomes highly conditioned by familiarity.  These countless and unnoticed conditionings are held as memories of both experience and indoctrination in the subconscious and the unconscious mind.  There is both an input of sensory and thought consciousness and a feedback / storage circuitry that resides in the body.  This feedback / storage circuit continues to discharge even after an object of consciousness is removed.  Phantom images intertwine to create a metaphorical swamp of faint cognition.

What I term "the swamp" is a mental mashup created by the substratum of the illusion bubbling up from the subconscious; the unconscious is becoming conscious.  It is at first sight so terrifying that most who encounter it clamor back to the comfort of the illusion - maintaining a false sense of security through ignorance.  Others camp along the shores of the swamp, afraid to enter and equally afraid to leave.  Courage and readiness are needed - a willingness to risk it all in order to find the passage home; this is not said for dramatic effect.


"Cast away all concerns for this life. Be an outcast from human society.
Sever worldly ties.  Throw away attachment to friends and hostility to enemies."
~Dakpo Tashi Namgyal
Clarifying the Natural State

Some seekers might expect that destroying the cognitive illusion would put one in direct contact with the higher consciousness of Source Awareness.  In my experience, it doesn't.  Conscious illusions have a shadow, an after-glow or memory that stands between consensual consciousness and Source Consciousness (Awareness, Tau, God). This intermediate realm can have an initial appearance of shadowy, ill-defined nature in silhouette.


"Run from what's comfortable.  Forget Safety.  Live where you fear to live.
Destroy your reputation. Be notorious."

The swamp appears as a reservoir of fears and other things we find generally unpleasant as, hidden within the subconscious, much of it simply hasn't been looked at carefully.  Finding oneself in such a hazy realm without a solid self-identity is disorienting and, at times, simply terrifying.  It's best, even necessary, to retreat from the consensual realm to put all focus on the challenges that lie ahead.  Keep energy levels up.  It's dangerous to try to do too much; you can't well-afford to break down here.  Anger arises from detrimental attachments to past illusion; frustration arises from attachment to desires for the future.  Both are clear indicators that you are still in the illusion.  Relax, meditate and recharge whenever possible.


"How does it feel, how does it feel?
To be on your own,
with no direction home
A complete unknown,
like a rolling stone."
~Bob Dylan

The journey is powered by the processes of renunciation of all indoctrination and purification of conceptual thought patterns; it will take seemingly forever to let go of the paradigms that we mistook for reality.  Clean, purify, polish - when you think you've reached it, clean, purify and polish some more.  Purification of thought and illusion is difficult to self-assess; it's too easy to think you've reached it, but it is generally the mind misguiding the mind.  So many self-proclaim, but have only substituted one delusion for another - a false prophet to themselves and others.

Finally, this is the way home. There is a sense that it lies down deep beneath the surface as opposed to high on a mountain top, though either concept is metaphorical.  Enter the swamp and tread lightly; appearances will subside. Stillness is your guide and firmness your protector.  Lighten up and drift - downward, downward, downward - landing lightly like a feather on an asteroid. Within absolute stillness, one will the recognize the infinite void of the primordial state, the dharmakaya.

The sacred perspective is ordinary, familiar and nearby though a mystical journey lies yet ahead.  The formless realm, operates in much the same way as the physical realm and important insights can be gained here. There are signposts to notice along the way: voices, visions, songs and poetry - messages from Source Consciousness left to guide you.  Discernment is required. There is a lot of misinformation that arises along the way; teachers/gurus/friends will misguide you; ego threatens constantly.  Walking the razor's edge is an adventure in perspective and discipline of the mind.

"Some of you are not smiling.  You are wasting your time."
~Thich Nhat Hanh


Finally, and it's really very important:  maintain an inner smile while letting go of all attachment to outcome - especially, attachment to preconceived ideas of awakening, enlightenment, god or whatever label you have for it.   Give it all up and let it be as it is.