Although we are old ones, our voice is very important for the world at this moment. The misunderstanding in this world is that some men think they are very big. We are small ones with this love, which is the only big thing we have. We can give good words for the world. I have a very big faith that we are able to change something that we are going to be able to give hope for our next generation.

We arrived on the Big Island of Hawaii to participate in a series of works with Maria Alice, a madrinha of the Santo Daime church (see Daime Ten) in Mapia, Brazil -- a remote region along the Amazon.  She's also often described as a member of the "Council of Thirteen Indigenous Grandmothers".  Off to my right was the "barn" where the Hawaiian version of the sacrament is made.  It wasn't what I had imagined it to look like -- it all seemed very ordinary.  The following days would, for me, be an exploration into subtle energies.

What are the subtle energies? It seems to depend upon the semantics and the belief system employed. They could be described as entities, spirits, or subtle life forms. Others might consider them subtle nuances of perception. Many might consider them mental or egoic manifestations, illusions or hallucinations.  It might be that all of the above can be true.

A slight insecurity struck as I walked up to the small temple.  I had come all this way and was about to attend a flower essence workshop.  "Will I be the only man here?" It wasn't an important question, but my masculine conditioning surfaced to ask it.

I soon found that 2 other men were attending -- along with twenty-some women, exposing an interesting blend of gender biases.  Maria Alice was there with an assortment of essences extracted from flowers in the Amazon region said to have healing energies.  She uses the flower essences in the healing center she runs in Mapia.  She had selected flowers from new growth regions of the Amazon -- because, she explained, they possess the essence of rebirth of what was once virgin jungles.

The essences were contained in vials at the center of the circle in which we sat.  First we stated our intentions.  Mine was to cleanse  -- enough to feel the subtle energies.  Interestingly, another woman in the group wanted the opposite -- to close down some of her open channels to energies that she couldn't control.  We then, each in turn, selected one essence.  I felt my mediumship rise to the occasion.  I could "see" the one for me before I approached.  I placed a few drops into my cup and filled the cup with water.  As I drank it, I sensed a creamy white light enter with the liquid that then rose up from my gut along the spine and out the top of my head.  It felt very cleansing.  The taste was subtle and clean.  This is what I asked for -- more cleansing to bring the subtle senses to life.

It turned out to be Jurubeba.  Maria Alice explained:  Jurubeba has a flower like a violet star with violet rays that connect to a higher vibration.  Its dominant element is air, along with fire and earth - it is associated with the 6th chakra.  It supports transformation of the aural field into the subtle higher frequencies -- making the aura softer.  As she described it, I knew that she referred to the essence I had taken prior to her revealing it.   The fruit of the plant can be cooked to produce a medicine that will heal the liver.


After lunch, we gathered outside around an alter beneath a large tree.  We would be sampling essences from the big trees of the Amazon.  Again, I "saw" my choice from a distance - it was Pau d'Arco Roxo.  Another violet flower.  This yielded a pleasant experience, too, when a few drops were added to water and sipped.  It's all so subtle.

She didn't discuss how the essences are extracted.  The medicines are described in "energetic" rather than biochemical terms.  It lacks scientific merit or reason but, in the moment, the effects seemed noticeable.

A Santo Daime Messa Branca work was celebrated the following night. Most significantly, I encountered a subtle life form.  It was feminine in nature and ressembled a candle flame in shape and texture - like a nada.  She was light and whispy.  She entered my body and then left it -- again and again.  She was teaching me to feel her presence.   She wanted to experience a man's body.  Lili sensed that she was named Lutcia.  She hung around for a few days, but I don't know that she made it back on the plane with me. 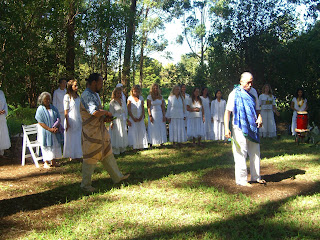 We held an "Umbandaime" (Umbanda and Daime combined) gira Sunday, beneath the same tree, to the rhythm of drums and the lovely voice of Maria Alice's daughter, Julia. A gira is a traditional Brazilian celebration of spiritual charity, healing and mediumship between the earth and the astral.  To this end, many lines of spirits are said to participate - Caboclos, Boiadeiros, Prento Velhos, Criancas.  Beings in the line of the Orixas, Ogum, Oxossi Xango, Oxum, Jemanja, Lansa, and Oxala are also said to show up to receive the healings and light of the divine beings that are called. 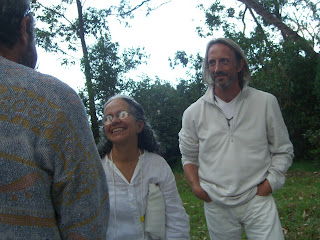 It was a beautiful day and the spirits came out to play.  I stood and watched as others seemigly became possessed by spirit.  It was an interesting and sometimes awesome experience.  Maria Alice and several other participants pranced around the circle, embodied by the spirits and souls they invited to bring or receive healings and light.

However, my left brain would not disengage.  Despite heroic doses of Daime, I  was unable to feel the spirits in me - this is still a stretch for me.  I asked one of the guardians who I'd watched twirl to the beat of the drums in the center of the circle, what he felt.  He responded that he simply gets out there and begins to twirl and allows the spirits to take it from there.  "Fake it 'til you make it?" I inquired.  "Pretty much," he replied.  However, if I am to believe that I played with Lutcia in the Messa Branca work, I must leave some space for those who embodied other energy forms. 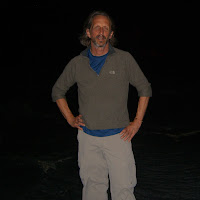 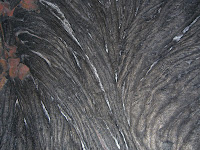 During the Messa Branca work, I felt an inspiration to go to the volcano to begin a 41-day fire mantra. This deviated from my exploration of subtle energies -- there's nothing subtle about a volcano!  We hiked through 2 craters of Kilauea's volcano and followed an old lava tube several hundred feet into the mountain.  The following night, we hiked out onto the razor-sharp lava beds south of Hilo to where the lava is actively flowing into the sea. Steam still rose beneath our feet as much of where we walked was over lava less than a week old.  It was a long hike at night in order to circumvent the security patrols that guard the area. The power was intense.  We got to within 100 yards of the flow, but Lili would not allow me to go closer nor would she wait for me to begin a fire mantra.  Oh well, I guess we were mere trespassers from the mainland that night. 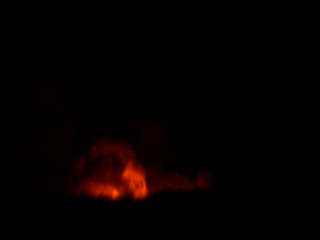 The exploration of subtle energies continues ...
Posted by Lee Jensen