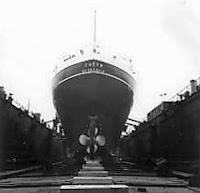 One of the most personally influential visions encountered in my meditations drew attention to the junk that humans accumulate in this realm (see Revealed). I was shown that this junk piles up and interferes with the ability to see, think and respond clearly.  The image was of something like large "dust bunnies" moving about the surface of the planet, hiding the souls within from view.
I saw the others, but didn't see my Self in the vision. It's probably a good thing.  I could observe the condition compassionately where ego may have blocked the information had it passed by its filter.  Yet, ultimately, intellect reasoned that Self must be affected, too -- and ego has learned to trust intellect. Ego and intellect agreed on the importance of a healthy vessel in the material realm.

Further investigation revealed that junk from the depths below was clinging to my vessel no matter how I tried to blow by it.  Since repair attempts made underway over the past few years were unable to clear the problem, it was decided to bite the bullet and put the vessel in dry dock for an overhaul.

The most observable repairs have been to the physical structure.  Forty six pounds were shed within the first five months.  Displacement of the vessel is holding steady at about 164 pounds -- it had peaked nine months ago at 208.  I didn't think I was particularly over-weight, but there was an awareness that the girth of my 6 foot frame had grown.  It was a sign of structural deterioration caused by unhealthy foods, toxic beverages, and the havoc of life's stresses and frustrations.

The hull reconstruction project was managed by the diminutive, though irascible, Ship's Chief Steward  Lili.  The vessel's structure was re-aligned with Iyengar yoga.  Processed foods, alcohol and other toxic wastes were cleared from the galley and given the heave-ho.  The plumbing was flushed repeatedly with magnesium and organic apple cider vinegar.  Premium fuels were requisitioned -- vegetables, fruits, meats and dairy products from local farmers' markets and legitimate organic food stores.  As the pounds began to fall away, new foods and supplements were added:  fresh wheat grass juice every morning, vitamins and amino acid supplements and, recently, blue-green algae.  The conversion from steaks, burgers and pizzas to clean bio-fuels is complete though the mixture is still running rich due to a weakness in the fuel regulator for Jelly Bellies and occasional chocolate.

The physical cleansing and healing was relatively uneventful though some pain bodies screamed as they were released to divinity.  The vessel can now fit into suits that were bought when I was a postdoc.  My belts are cinched up to the last notch and it's not quite enough.  It's time for a new wardrobe -- perhaps a monk's robe, but the ego is still a little too vain.

So, the Captain was furloughed for training, program updates, and R & R.  Vipassana meditation (see Scientists' Retreat) was found to be a good place to start.  It isn't as easy as it looks -- there are few things that are more difficult than sitting on a cushion without grasping thoughts for an hour.  I highly recommend participating in a silent meditation retreat for 7 to 10 days early in one's practice -- it took 4 days for me to settle the mind/body and the remaining time is needed to be there.  Other meditation styles were practiced, too -- guided, chanting, mantra, yantra -- contemplation and jhāna.  It distills down to personal choice.  Simple was found cleanest for me.

The crystal was polished further with breathing exercises - tantric and kundalini yoga.  Like everything else in this arena, there are lots of flavors.  Again, keeping it simple was best for me -- allowing the breath to do its work.

Shamanic medicines helped to cut through some of the heavier crud and bridge the chasms.  They must be used with care.  If you go for a drug trip, that's what you'll get.  Use them wisely and set your intentions clearly.  They are gifts from a higher realm.  Be patient with those who are unrealized and protective around those unable to recognize Truth.

Attention was focused on the present and emptiness was contemplated.   I looked into the void and saw the unmanifested.  I listened to silence and heard heaven's song.  The heart was opened and the vessel was refueled with love.


With the barnacles removed, rotted timbers replaced, and engine flushed, the vessel is now engaged in practice maneuvers about the home port.  The purged hulls are filled with fresh air and one can once again see lights shining through the freshly polished port holes.  His Majesty's Ship is again strong and seaworthy, nearing ready to make way for ports unknown.
Posted by Lee Jensen