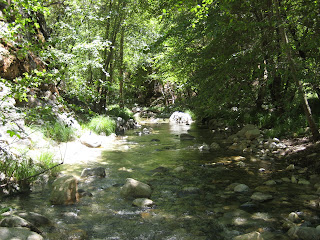 Tassajara Zen Mountain Center
Carmel Valley, CA
Delusion transformed is wisdom
Greed transformed is generosity
Anger transformed is compassion
Tassajara is a beautiful, serene Zen retreat center located in the Ventana Wilderness, 14 miles down a poorly-maintained dirt road from where the pavement ends at the top of Carmel Valley. I spent 4 days there with Darlene Cohen, a Zen Priestess from the Russian River and a small group of women (yes, I was the only man) to investigate "Rage, Lust, and Foggy Mind". The remote center is built around a beautiful hand-crafted Zendo for sesshin (group meditation), a dining hall, and several cabins in all styles, including a few beautiful stone rooms along the creek with fireplaces and kerosene lamps where I was fortunate enough to stay. One of the jewels of the remote center is a natural hot springs spa built along the creek that flows through the property. 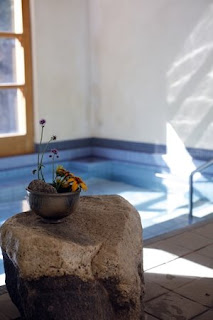 As we sat in a circle for our first meeting in the yurt that served as our meeting place, Darlene asked if I was comfortable being the only male in the group. I assured her that I had no problem with it, but noted that I was surprised -- I had been conditioned to think of rage and lust as issues associated with masculine attitudes. This was received with a smattering of giggles from the women seated in the circle.

Several of the women were part of a "women's" sangha that Darlene leads. I asked why they chose a women-only approach to Dharma. No one had an answer. Even in a Buddhist community, it seems that gender bias is gender-biased. But, despite my chagrin, we all got along very well and I enjoyed my role as the token male.

Anger, Hatred and Ill Will

The 9th Buddhist Precept is "Harbor no ill will." Everyone has offenses done to them. How you handle them defines who you are. Living with hatred is living in a hell realm. It destroys the virtues in you. Anger is the hardest to practice with - it separates us from everything. Yet, taking a virtuous stance is no better as it will separate you, also.

In zen this precept isn’t a prohibition against the mental state of anger, it refers to holding onto anger, indulging in it, letting it fester, or bearing a grudge. Anger often serves the purpose of helping us uphold our position by justifying it, by formulating how something is unfair or undeserved. This justification solidifies not only our point of view but our sense of separate self. Thich Nhat Hanh said, "Treat your anger with the utmost respect and tenderness, for it is no other than yourself. Do not suppress it–simply be aware of it....When you are aware that you are angry, your anger is transformed. If you destroy anger, you destroy the Buddha, for Buddha and Mara are of the same essence." The Bodhidharma One-Mind precept is "Self Nature is subtle and profound. In the midst of the selfless Dharma, not contriving reality for the self is called the precept of not harboring ill will."
-- (ref: Josho Pat Phelan)

Note: The 10 Essential Precepts in Zen are different from the more archaic 10 Precepts in Theraveda Buddhism.

Your enemies can be seen as spiritual friends. They will challenge you to confront yourself and expand yourself. Challenge the notion that you are small and need to be protected. Big people (minds) can absorb assaults better than small people (minds). Find a reference point wider than what you have currently. Take full responsibility for your actions. Question what you may have done to contribute to any situation. Take responsibility at all times.

Our demons are usually more apparent to others than to ourselves because of our denial. There are 4 categories:

1) Outer Demons: Tangible demons perceived through the senses such as illness, relationship, addiction

3) Demons of Elation: Inflated joy - over-reactions to "good" things such as sudden riches or fame that can lead to abuse of power.

4) Demons of Egocentricity: Aversion to things that threaten the ego.

Greed, hate and delusion act as Dharma gates. Be OK with making wrong decisions -- just be mindful of everything you do. You learn from all of it. The precepts are simply guidelines -- not commandments.

Lust is the epitome of craving. There is nothing wrong with sex in the Buddhist view as long as it does not harm another (3rd Buddhist Precept). The problem is that it tends to create attachment.

Understand which realm you are playing in and play by the rules for that realm. There is no good or evil, right or wrong -- just suffering or happiness and joy. Christ operated in the highest realm - "Father, forgive those for they know not what they do." But, he was not understood in the earthly realm and was martryed.

I told the group about advice that Donald Trump offered at a recent seminar in San Francisco, which was something to the effect of: "If someone screws you, you've got to hit them back. Hit them so hard and fast that they don't even know why you hit them. Make an example of them so that others won't ever try to mess with you." I expected a pious response. But, Darlene considered this for a moment and answered softly, "That's probably good advice to someone who has chosen to be a real estate developer on Manhattan."

Another time, I told the group of people with whom I was very angry. Darlene answered, "You should kill them. I'm sure that you are very capable of doing this." Hmmm ... she couldn't be serious. Zen masters are famous for koans, so there's probably a deeper understanding that she expected me to uncover. Still, she affirmed her counsel during our private interview, "I'm surprised you haven't done it, yet. What are you waiting for? I'm beginning to think that you can't do it."

Everyone is wronged and everyone perpetrates wrong upon another at many times during their lives. The natural flow compensates for this. Consider if you are above the delusions of revenge held by others.

We discussed a well-known story of a monk who was accused by a young woman of fathering her illegitimate child. When confronted by the elders of the village, the monk responded, "Is this so?" and offered to care for the child. Later, the mother of the child recanted her story, admitted that the father was her young boyfriend and demanded that she have her child returned to her. The monk replied, "Is this so?" and brought out a young boy to return to his mother.

What are the conditions necessary for anger to arise? Something we think is right is violated. But, remember, there is no right or wrong -- these are just concepts, societal, legal and religious constructs. Still, be mindful of the rules of the realm and aware of the value system that others may hold.

If you ignore the anger, it will come back to bite you. Don't try to suppress it. Most depression is repressed anger. Holding anger is like holding a hot stone. It harms you rather than your enemy. Judge the situation on a case-by-case basis -- be flexible, not rigid. Don't hold on to your anger, unleash it wisely. Be happy!

Those conditions referred to in Buddhism as defilements cause contraction of the mind and soul around them. In what Ajahn Jumnian called the "cycle of dependent origination", we collapse around these illusions and, in doing so, allow them to recycle, proliferate and take on greater significance than they warrant. Whether the seed of the defilement is real or imagined, the contraction around it is always more damaging than the assault . Adi Da used the metaphor of a closed fist that holds nothing inside. Releasing the grip allows the mind and soul to be free again.

The intention is to take anger on -- acknowledge it and learn from it. Then, figure out how to express it and deal with it -- this is the skillful part. The insight is to not be blindsided by it again. Anger can be the agent of your complete transformation -- it is that powerful!

Revenge is often justified, but rarely warranted. It's better to move forward than contract around the past. Often the example of Aikido works best -- wisely working an opponent's own misdirected energy -- giving none of your own to push against. Your enemy will often defeat him/herself through ignorance or karma. Still, there are exceptions. It is important to maintain your power - not in the egoic context, but by way of self determination. One doesn't need to emulate Ghandi, or Christ, or the monks and lamas of Tibet. Unless you can operate at that level, such virtue is often misguided and even proliferates repressed anger and ill will.

One also needs to consider the further harm to yourself or others that may be perpetrated if you take no action. Doing nothing is often cowardliness cloaked in virtue - or worse, apathy. The earthly realm is influenced by "common truth" (see "two truths doctrine"). This is the egoic earthly realm - where your enemy is seen separate from yourself - the realm most of us live in.

First, understand your rage. Did you bring this on yourself? Is it worth your time and energy? Are you better off focusing on something else? Can you truly leave it? 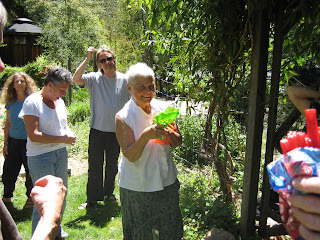 The literal translation of "Zen" from Sanskrit is meditation. Zen differs from Theraveda Buddhism in mostly subtle, though substantial ways. Zen began as a rebellion against the Abhidharma and Theraveda practices. It tends to be more formal with lots of ceremony, bowing and prostrating. Sitting meditation (zazen) is done while seated and facing a wall -- with eyes softly open to prevent entry into Jhana. Thus, zazen is deliberately contemplative -- often focusing on a subtle question or koan. The "Middle Way" is emphasized.

The Buddha taught that ignorance created by greed, hatred and delusion keeps us from realizing that we are already enlightened. The Zen Buddhist lineage teaches that meditation unfolds the realization of our enlightenment -- our true Buddha Nature. Zen favors direct, experiential realization through meditation and dharma practice over theoretical knowledge.

The Zen strategy is to develop non-preference. Nothing to like or dislike - nothing special -- no reincarnation -- no Jhana (it's just a state of mind) -- just THIS. Emptiness -- with no discrimination -- everything is already perfect.