I spent 36 hours in silent meditation over New Years Eve and Day. The phones and AV systems were off, candles were lit, fireplaces burned upstairs and downstairs – quiet and stillness prevailed. I didn’t have extended sleep, but only napped for short periods. Language is insufficient to describe the experience that ensued.


“The Tao that can be spoken of is not the constant Tao”.


The experiences over the past couple of days have changed my perception of the boundary between the physical and spiritual realms. It's going to take a while to assimilate what I saw, digest it, and apply it to everyday being. What I saw seemed very real, but so different than what I'd imagined. I want to write about it now before my mind begins to rationalize it. I’m sharing this experience of New Year’s Eve and New Year’s Day with you as my friends and you can choose to accept any part of it or ignore this all in its entirety.

Our material world seemed to be constructed of a vast membrane that holds all life in this realm – humans, plants, animals and the even soil from which it grows. I emerged from this physical layer as my spirit emerged from my physical body. It seemed that I was then suspended at a vantage point where I could observe the physical realm in its entirety. 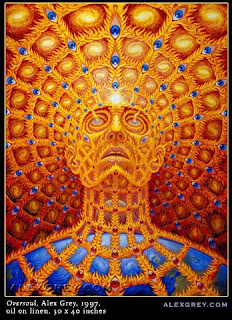 Entering the physical realm precipitated loss of insight and awareness. I was struck by the dramatic shift to ignorance once inside (or through) the membrane. There was a pathetic quality to this lack of awareness, yet it was not revealed why this occurs. It may simply be a quality that goes with living in the physical world. I could sense beings in the physical realm who know of the truth – the enlightened ones, though they represented an extremely small percentage of the total population.

The laws governing the regions beyond the membrane appeared quite different and amenable to will. Space and time were distorted from what we are accustomed to experiencing in the physical realm. The laws of the physical realm don’t seem to apply. It was lighter and more free. Space and time were easily transversed. Complex concepts could be communicated without language.

Physical laws govern the material world and did not seem to be readily manipulated. Here I felt that one must accept the limitations of physical laws in order to live in the physical realm. Therefore, those residing within the membrane seemed to be best served by working within its restrictions rather than attempting to effect or expect spiritual solutions. Knowledge, understanding and awareness are very important to moving in the material realm freely and they are rare qualities here.

The immediate purpose for entering the physical realm seems to be to create and expand it, but the greater purpose(s) for creating it was not revealed. The material realm is a much newer realm than the spiritual realm(s) and appeared to be under construction -- there is allot of energy being put into creating it. Further, I had the sense that this is one of many realms and that realms exist within realms on a very vast scale.

I saw that we can be creative in this material world and allow what we do to succeed or fail without judgment – essentially, in an evolutionary manner. It’s a living laboratory. We can play here and experiment here, build things and allow them to be torn down – technology, political and social structures. There is no right or wrong – just an evolution of a dynamic spiritual slurry within this environment. Individual accomplishments seemed unimportant -- generations of accomplishment of entire cultures can be wiped out without hardly being noticed. Still, there seemed to be a motivation to create, maintain, expand, and perhaps refine the physical realm. So, while there is no lasting egoic accomplishment to be fulfilled, there was still a perception that our participation contributes to the greater will.

One important theme from both nights was the benefit and necessity in freeing one's self. On the first night, I was aware of a personal membrane that contains me -- each other being also has one. The numerous membranes interact dynamically with and flow past each other. Attachments can form with other membranes like sticky atrophic plaques that inhibit our free movement. I found that I could free myself by letting go and by not clinging to ideas, fears, anger, or material possession. Allowing my own membrane to flow smoothly and without restraint felt far healthier. Relationships could be maintained by dynamic free interaction rather than attachment; unhealthy attachments were simply let go. It was a very freeing experience as if my boat had been cut loose from the weeds it was stuck in.

This theme manifested differently on the second night. I saw that most beings in the material world carry around loads of junk that manifests about their spirit – like dust and mud, it seemed to accumulate with age, weighing the spirit down and preventing it from being healthy and able to move about freely. This was what struck me most about what was revealed – this accumulated junk is so crippling. It creates such an impediment to our progress here – it’s responsible for so much stupidity and unpleasantness. It was simply stunning, pathetic and sad to see how much junk physical beings carry around with them. I could see beings covered in junk trying to instruct others on how to manage in this realm – sincere, but vain attempts to help – the blind attempting to lead the blind. I perceived a great need to be free of this psychic junk and to convey or demonstrate to others ways to do this.

Negativity in the material realm appeared to be mostly due to the ignorance. I noticed many false leaders and teachers, often (but not always) well-intentioned, who were attempting to lead others while lost in their own ignorance.

Finally, I was struck by the sense that I was seeing things as I believe I saw them as a toddler. It took a while for me to understand why this had a very odd but familiar look. It's a very different perception of the world than that of an adult. Perhaps, what we see as adults is a trained illusion painted over truth while the toddler’s mind is undeveloped and unable to see the illusion. It's something I want to try to look at and notice.

This is only my perception of what I saw - it may be looked at and interpreted differently by someone else.
Posted by Lee Jensen