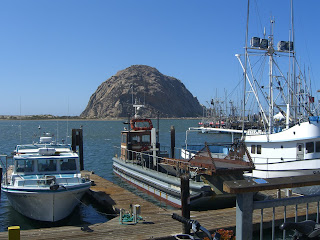 Concentrated Mind to Investigate True Nature
Morro Bay, CA
Clean up your act
Learn to concentrate
Use concentrated mind to see the true nature of things
Jhāna refers to the states of meditative absorption attained through highly focused concentration. The jhānas and arupajhānas represent 8 of the many states of Samadi - concentrated calm and tranquility. I spent 3 days in Morro Bay with Leigh Brasington and a small group of people to meditate and learn about the practice of jhāna.

Jhāna is controversial within Buddhism. Ajahn Jumnian stated several times that he no longer teaches jhāna -- explaining that it took too much time and was difficult to maintain. Jhāna practice was also one of the issues that lead to the separation of Zen from the earlier forms of Theravada Buddhism. Thus, in zazen (Zen meditation) one meditates facing a wall with eyes softly open -- to prevent inadvertent entry into jhāna. However, the Buddha taught jhāna as an accelerated path to enlightenment.
There's a lot of mystery and magic associated with jhāna. This is where out-of-body types of phenomena are experienced. They can be used to enter supernatural realms such as the heavenly realms and the Brahma realms.
Having been one, you become many; having been many, you become one; you appear and vanish; you go unhindered through a wall, through a rampart, through a mountain as though through space; you dive in and out of the earth as though it were water; you walk on water without sinking as though it were earth; seated cross-legged, you travel in space like a bird; with your hand you touch and stroke the moon and sun so powerful and mighty; you exercise mastery with the body as far as the brahma world. -Samyutta Nikaya 12.70
Once you have been in these states, it is said that it is easier to manage hindrances such as sensual desire, ill will, aversion, and skeptical doubt.
Secluded from sensual desires
Secluded from unwholesome acts.
There are over 40 known methods to attain "Access Concentration". To enter jhana, one must reach that state of quiet that one reaches at day 3 of a silent retreat. Three of the more common are:
1) mindfulness of breathing
2) Metta practice
3) Body Scan
There are four embodied or "material" states of jhana:
1) Vitaka - thinking
2) Vichara - pondering
3) Piti - rapture, release of pleasant energy
4) Sika - Happiness, sustained Piti - similar to Kundalini
There are also 4 "non-material" states known as the arupajhānas:
5) The sphere of infinite space
6) Infinite consciousness
7) Sphere of nothingness
8) Sphere of neither perception or non-perception
Finally, there is a 9th state of deep concentration:
9) Cessation of feeling and perception.

Therefore, use the breath as access, then switch to pleasant physical sensation such as smile, hands, heat and stay focused on that pleasant sensation. Create a positive feedback loop of pleasure sensation. Maintaining attention in this way will lead to entering the first jhāna - the others should follow in sequence. Do not "reach for jhāna" as craving will create a hindrance.
Leigh recommended doing half of sitting practice in jhāna and the other half as insight meditation.
Leigh has further information on his website:
http://leighb.com/jhanas.htm
Posted by Lee Jensen